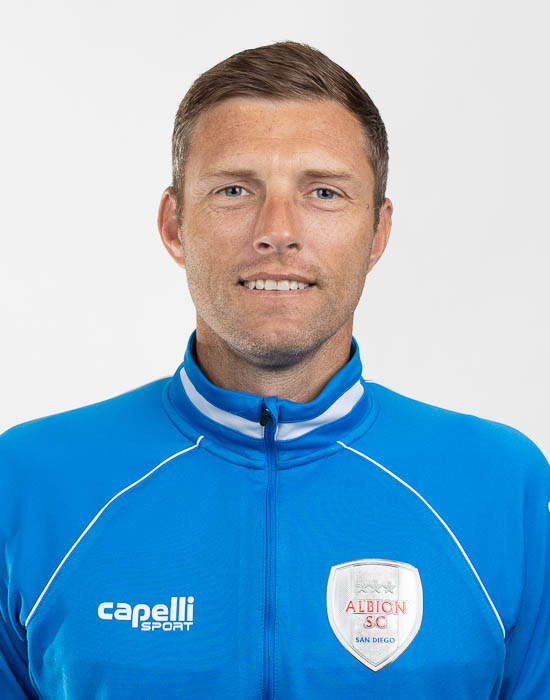 Wayne Crowe oversees the Soccer Specific Programs at ALBION SC while also managing the Development teams U7-U10 and the coaching staff assuring the program that the coaches, teams and players are in line with the curriculum and developing within the ALBION SC structure. In addition, Wayne will be providing all of the U7-U10 teams with additional training days and implement many different aspects to the program that will assist the program in developing our players. The Development Program at ALBION SC is one that is very structured with an Academy setting and curriculum. Within the Development program there are expectations for each player to come away with that we will allow us to have one of the highest standards of youth players in the country. Jason Heth is a Native of San Diego from El Cajon, CA. As a youth player, Jason played for Club America and USA Soccer Club. Jason was a four year varsity starter for the Braves, All League honoree, and a two time team MVP, as well as the team Captain his Junior and Senior seasons at El Cajon Valley High School. After High School, Jason attended Cuyamaca Jr. College and started playing soccer during the 91-92 season where he had a season ending knee injury and red shirted. Jason played two more seasons at Cuyamaca Jr. College during the 92-93 and 93-94 seasons.

Jason played for the San Diego Sockers of the CISL in 1995 and 1996 as a walk on at an invitation camp only. Jason made his professional debut with the Sockers 8-7 international victory over club Atlante, followed by the Houston Hotshots of the WISL for the 2000 WISL season.

Jason has coached club and high school teams in San Diego since 1994. Before joining the ALBION family, Jason worked at Hotspurs USA and San Diego United in leadership roles. He has been a high school coach for over 20 years, at St. Augustine, El Capitan, El Cajon Valley, Granite Hills, and currently Santana. He has won three high school tournaments and seven league titles in the last sixteen years with other notable finals appearances.

Other memorable coaching accomplishments that Jason has made include the 2004 State Cup Finalist, 2010 State Cup Champions, and Regional Semifinalists. In 2007, Jason was named the Head Coach for the SOCAL Fusion who competed in the NPSL division 4 level. He led the team to a first place league finish in 2007 and 2008, and a National Championship in 2007, alongside the 2008 Unions Tribune Team of the Year award for 2007. In Jason's role as Director of Soccer EC, he oversees a variety of operations for the club, from club communication, program implementation, organization, and various needs for the overall program.